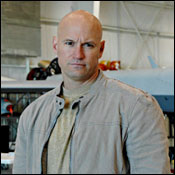 I found this new show a few weeks ago and I keep coming back to it. It's on The Discovery Channel after Myth Busters which totally fits as their new high testosterone TV schedule. On Future Weapons this super hot and hunky ex-Navy Seal (Richard Machowicz) goes around the country (and sometimes the world) to see new weapons getting ready to be deployed. There are some really kick-ass high tech stuff on this show. My favorite was the new auto-loading tank which can fire several shells so rapidly and at different angles of trajectories that all will hit the target simultaneously. Tonight's episode is called "Smart Weapons". I hope they don't give guns to robots. That's the path to destruction of society.