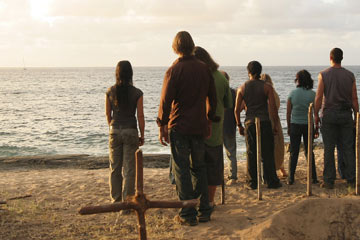 Last night's LOST had lots going for it. We get to see what Michael was up to during his absence. It was only the third time we got a island flashback. Or was it the second? Can we count "The Other 48 Days" as a flashback? Irregardless, we see more of Alex, Mr. Smilely, and were introduced to Miss Clue (or Klue, or Klugh, whatever). In a surprise move, Jack told someone his back story. He told Sayid he was in Sydney to bring back his father's body. No one every tells anyone their backstory. I was also surprised at Sawyer's confession to Jack that not only did he screw Anna-Lucia but he's Jack's new BFF. Maybe they might start trusting each other. Naaaa. So here's what we know now: