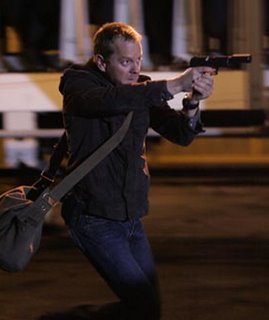 This weekend I finally caught up on the best action show on television, 24. This season is my favorite season yet. So many favorites from previous seasons have died so far: David Palmer, Tony Almeda, Michelle Dressler, Edgar Stiles, and Secretary of Defense James Heller. They continued with the pattern of “who’s the biggest bad guy” where after they catch the bad guy it turns out there is someone higher up pulling the strings. This year they’ve gone from Russian thug terrorists to Russian Mafia-type terrorists to Robocop and now to President Logan. With the President behind all the madness this time, it’s a little more believable than previous seasons. Unfortunately for him more and more people are figuring out what he’s up to. And he may not even be the biggest baddie this year. Who is that group of suits on the conference call? Where they the one getting on the plane at Van Nuys airport? Tonight, Jack gets on the plane and tries to get the recording that incriminates Logan back. Only five hours left in the best season of 24.

Also tonight, PrisonBreak. I’m not yet caught up on this show yet.