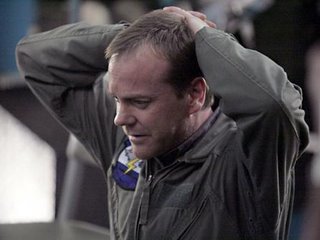 Another day is over on 24 and another President down. They go through Presidents really quick on that show. I was a little disappointed with the beginning. I found the whole idea of terrorist taking control of a Russian submarine in Long Beach Harbor a little much even for that show. Luckily that went by quick an we got on to the exciting conclusion to President Logan's treason. The look on First Lady Charlene's face when Logan is about to be taken off was worthy of an Emmy for Jean Smart alone. She and Novak had such great "gotcha" looks. It was a great pay-off. Last season ended with the stupidest ending ever, Jack walking into the sunrise. This year had a great cliff-hanger, Jack being shanghaied by the Chinese. Day 5 was certainly the best season yet.