The upfronts are out this week. NBC created new YouTube channels for each of its new shows which I find odd. All the other networks just have them on their regular channels. First let's look at the fall shows. 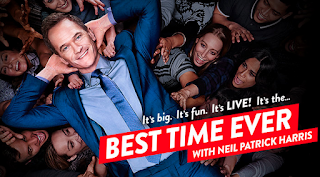 Best Time Ever with Neil Patrick Harris
A live variety show in Prime Time? I’ll watch this but it is going to end badly like they always do. Definitely Yes

Blindspot
A woman is found covered in new tattoos which have the secret to a vast conspiracy. She has no memory but she and an FBI agent have to figure things out. I’m not sure about how this would would. Episode 8: oh here’s a tattoo we haven’t noticed, let’s go figure out what this means.  Probably No

Hearthbreaker
She’s a hot doctor and one of the world’s top cardiologist. From the trailer she has to balance saving lives with obtaining funding. I’m not not interested. Definitely No

Heroes Reborn
If you watch the original series, every season they made up a new back story as to why people had powers so I guess they are starting again. We are approaching Peak Superhero. Probably Yes

People Are Talking
Another comedy about hot 30-somethings. I just can’t quit those. Definitely Yes

The Player
A former special forces operative tries to stop crimes while one percenters gamble on whether he will succeed or not. I love high concept TV shows but this one is a bit to out there for me even with the Las Vegas angel. Definitely No

Here's what's in store for mid-season. If the current season means all the way through next summer.

Hot & Bothered
Eva Longoria is a telenovela star and this show is about her home and work life. Yes, yes, a thousand times yes! Definitely Yes

Chicago Med
As we approach Peak Superhero this show also shows we are approaching Peak Chicago. This is the newest in the Fire-PD franchise neither of which I watch. Definitely No

Crowded
I love Patrick Warburton and this looks like a funny family comedy where the rest of the family won’t leave them alone. 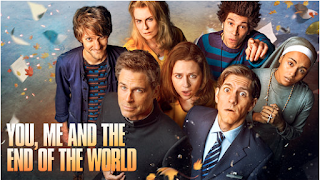 You, Me and the End of The World
A comet is heading to destroy the Earth and hilarity ensues. Definitely Yes