Here are the shows that ended this year after more than one season.

NBC
Parks and Recreation - This show had a scheduled ending after 7 seasons. The final season was in the future and the final episode showed the full future history of all our beloved characters. I still have the whole season on my DVR to rewatch over the summer

Parenthood - I stopped watching a few seasons ago. This was a scheduled ending. 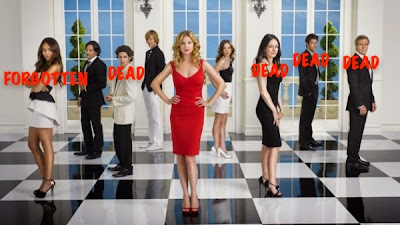 Revenge - Even though it wasn't an official final season it was kinda like they knew it was the final season as soon as they killed off Daniel. It was a good ending that could have possibly led to another season but didn't have to. This is the photo I posted four years ago with some augmentation.

Resurrection - I didn't pick it up in the second season.

CBS
The Millers - Sean Hayes was added to this season but they still cancelled it quickly at the start of the season.

CSI - This ended this year? How did I not know about this? It was on for 15 seasons and I never watched one.

The Mentalist - The rip-off of Psych that I never watched. Still don't care.


FOX
The Following - I only watched the first episode and it was terrible. I can't believe it got a second season before it was cancelled.


The CW
Hart of Dixie - I love Rachel Bilson but I never watched one episode.