I love that @ChrisCubas killed it on @midnight, also his podcast @CanceledPod is amazeballs

I listened to the first episode of the Cop Rock podcast today. This podcast is right up my alley. I watched Cop Rock when it first aired as I was in college at the time. Well I watched the first episode. It was a train wreck. I remember watching it with my friend Mike and he said, "Really, a lady mayor?" I'm I said, "That's what you find unbelievable about this piece of shit?" I really need to find the rest of the episodes to rewatch them before listening to the rest of these podcasts. As far as I know, they are only on YouTube. 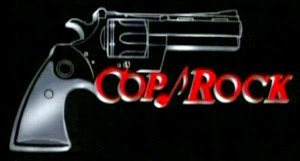 As a "musical homosexual" you think I would have loved this. Even 19 yo not-yet-out me knew this was an embarrassment to musicals. Now maybe if Sondheim had written the music for the first episode instead of Randy Newman I might have been on board. I don't really like Randy Newman. He is the only bad decision Pixar ever made, and it was a really bad decision.

#AVClub did a review of a random #PriceIsRight episode

I enjoy reading episode review/recaps on The AV Club. This week they did a full episode of The Price is Right. It's absurd and I love it. The comments of people who don't get it are also wonderful.

Back in 2009 I drove down to LA after quitting my job. During that visit, a friend who worked at Paramount studios gave me and a mutual friend a private studio tour. I got to walk through the set of this new show for the fall called Glee. I saw the school sets and Will's apartment.

Then only a week later they released the pilot on iTunes and I was hooked. I stopped watching when it got too New York but the final season has been a treat. Goodbye and thanks for all the fun.