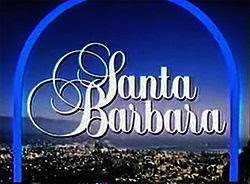 This is a new recurring kind of post for me, the "I Remember" post. I'm going to talk about shows I used to watch long ago without doing any research. It's just the show as I remember. So there will be some missing and incorrect information.

When I was a child I used to watch Days of Our Lives and Another World. The latter was since canceled but DOOL is still limping along as NBC's only remaining soap. I have a vague memory of another NBC soap called The Doctors. Then in high school there was Generations, the first soap with a significant African American cast, instead of the two token characters who have no choice but to get married, until a third black person moves into town. Finally NBC had Passions which I watched a few times at the gym and was thoroughly confused why anyone would watch it, and I love bad television. But my favorite soap opera was called Santa Barbara. And a few weeks ago when driving through Santa Barbara, I started to remember a lot of this show.

The show started with the return of some guy who used to be engaged to The Princess Bride. He was in prison for killing her brother. Upon parole he was released and returned. I don't remember much of this story line other than the not really dead Capwell mom was the real killer, but it was an accident. The two main families were the Capwells and someone else. They were modelled after the Capulets and Montegues from Romeo and Juliet. So the guy coming back from prison was probably a member of the other family. I didn't watch it for a while and then they had a big earthquake and stuff. I watched it regularly in high school. It was the time of two super couples, Mason Capwell and the character played by Nancy Lee Grahn and Cruz and Eden Capwell. Cruz was the successful Latino police detective and Eden was the daughter of the wealthiest family in town so this was a problem. But eventually everyone was happy with their relationship. And they were happy until the rape. Eden was violently and realistically raped in a very emotional storyline. She was smashed into her glass coffee table by a man dresses all in black, one of the many reasons never to have a glass coffee table. She recovered and they found out it was gynecologist. Gross. That character fell of a cliff or something. Apparently they liked the actor because they recast him as the new D.A. with the crazy wife. Mason and Nancy's character (I can't remember her name) had an on-again-off-again relationship. They were both lawyers and much of the time they were dealing with Mason's alcoholism. Often they were the comic relief with one mad capped adventure about a missing body they put in their garage freezer. I don't remember why they had a body, but it was funny.

I stopped watching when I went off to college and the show was eventually cancelled. It ended well though. Someone got married and all the couples got back together to celebrate at the wedding. There was some gunfire, but in the end all the couples danced happily off the air. I wonder if they are showing old episodes on the Soap Opera Network. I'll have to take a look.

Comments:
During high school I used to be obsessed with the soap Another World for some reason. I totally loved the character Felicia Gallant how was like a modern day Auntie Mame. The woman who played her went on to co-host a talk show on Lifetime and Saturday Night Live did sketches about them. Jan Hooks played the character with big shoulder pads and jangly bracelets.

Actually - It was Nora Dunn from SNL who played Linda Dano's part. Jan Hooks played her co-star in the skit/spoof of Lifetime's "Attitudes".