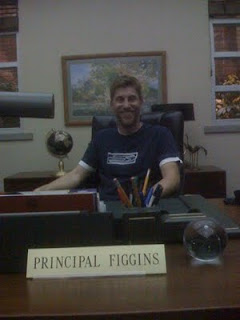 Today is the official start of the new fall season with the debut of Glee on FOX. Fox seems to always be the first one to start the season. Glee did have a preview back in May and it was great. I missed it and had to watch it on Hulu. I really love the idea of a preview and I really hope each network decides to run a preview of one new fall series during the season finale season. It really gets people excited for a show. In addition to the preview, Glee has released short episode clips all summer to tease us with. I missed a few but I did see Gold Digger which was hilarious.

Way back in May, I was visiting Paramount Studios with my friend Jason and our mutual friend Gary gave us a personal tour of the studios. They had several active sets going on, some back Nickelodeon sit-com, Nip/Tuck, and Glee. Nip/Tuck was shooting that day so we couldn't get in to see most of the sets. Glee however was clear and we were able to wander through. Here I am sitting at the Principal's desk. This was before I had seen the preview so I wasn't to super excited about walking though the set. We also walked though the classrooms, halls, the teachers apartment and the locker room. They didn't have any showers on the set. They have to do those scenes on location since there was no plumbing built into the set.