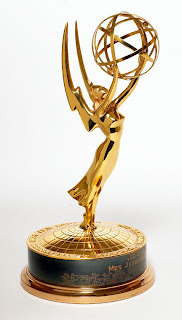 I rarely ever watch award shows. I didn't have much else on the TiVo last night so I tuned in to watch Doogie host. He was awesome and everyone told him so. He made a gay joke right in the opening song. I also counted three Kanye West jokes. Here are some of the highlights:

Comments:
yea! I love 30 rock. And I love Alec Baldwin. He is so good on that show. However, I am glad Kathy didn't win because I am bored and annoyed with her.