The End Of The Road: Pushing Daisies 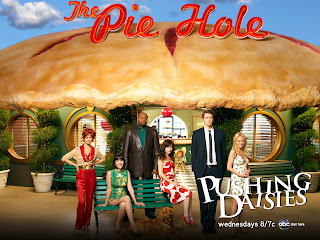 Last week my favorite new show of the 2007 season came to an end. Pushing Daisies finished up after 22 episodes. The last three episodes were burned through on a late Saturday night time slot. But at least we didn't have to wait until the DVD release. If you didn't watch them or TiVo them, caution SPOILERS AHEAD. You can also catch them on ABC.com.

The final episode had the funniest death of the entire season as Nora Dunn was eaten whole by a shark during a synchronized swimming show. This gave way to the Darling Mermaid Darlings coming out of retirement. And the quirkiness of the show never ends with the fantastic aquatic show. Although for a touring show the set looked nice and permanent. At the end we were treated to some closure and happy endings as well as only a small cliffhanger. Olive Snook got over The Piemaker and started a life with David Arquette and opened a Macaroni and Cheese restaurant in a building shaped like a cow. Emerson Cod got his book published and his daughter found him. After a fantastic pan through the entire town the show ended with Chuck "coming out" as alive to her aunts, thus ending their biggest argument and bringing harmony back to the Charles family. Farewell Pushing Daisies. I'll miss you.