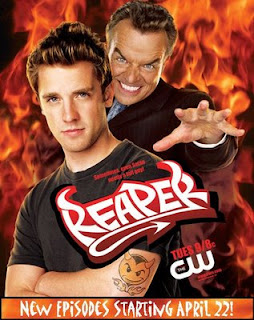 Yesterday I caught up on the last few episodes of Reaper on The CW. This wasn't renewed so the season finale was the series finale. I watched the last three episodes but I missed a couple before that which fell of the edge of my TiVo world due of over crowding. So I don't know how Sam's dad went from being the Zombie living in the garage freezer to being in the third circle of hell. It doesn't mater because he sent Sam a text message from hell and gave him a way to get out of his contract. Sadly the former gay demon turned gay angel betrayed Sam and he lost his ultimate showdown with the devil over a game of Quarters. Now his girlfriend Andi has lost her soul to the devil as well. I would love to know what the producers had in store for the rest of the series because I think Sam was going to be in the middle of the ultimate showdown between good and evil. Farewell Reaper, I'll mildly miss you.

Comments:
Actually, it may very well not be the series finale of Reaper, so don't say farewell yet. Industry insiders confirm Hollywood Reporter's article that ABC Studios is actively trying to sell Reaper. Syndication is a very real possiblity right now (as is cable too), but EVERYONE is recommending writing your affiliates! Help out! All details here: http://community.livejournal.com/reaperdmv/46875.html or visit http://reaperdmv.com for the most up-to-date information.

The feedback we've been getting back from the affiliates has been pretty positive.