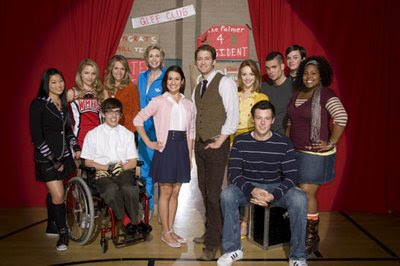 There's so many things I love about the new FOX Glee. I watched it this morning on Hulu since my friends I'm staying with in San Francisco didn't want to watch it. This is the great high school comedy that has been missing from the world. It is not afraid to be completely outrageous and totally inappropriate. Also as you can expect with a show about a glee club, it's completely gay. There's the requisite gay member. Also the overly ambitious bitchy girl has two gay dads. And there was the hot guy singing naked in the shower scene. Very sexy.

And what good teenage show is there without good antagonists. Unlike what you would expect, it's not the football team that gets all the respect and funding, it's the cheer squad. Their coach is the remarkably diabolical Cindi Lightballoon. Also the football team doesn't like them. Even the principle wants them to fail. But of course they all sound good together and you can buy their songs on iTunes each week. I bought Don't Stop Believing and listened to it twice while writing this blog post.

The hot football player singer laid it out perfectly. This school and town are filled with losers. He just wants to be the loser that enjoys what he does. It makes for great television.

Comments:
It was really good.

I liked it too. I want a furry glee club teacher!