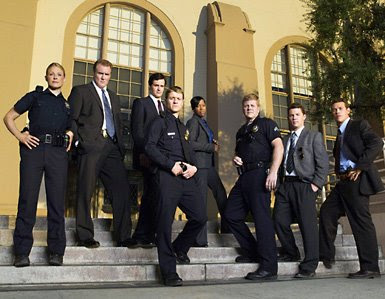 The 10:00 time slot on NBC's Must See TV night (Thursday) has always been very successful. In the 80's Hill Street Blues started the tradition. In 1986 L.A. Law took over with 8 seasons. In 1994, ER debuted and after 15 season closed down a little over a week ago. Each of these shows were ground breaking for their time. The newest (and possible last) for this time slot it Southland. With Jay Leno taking over all the 10:00 time slots this fall, this NBC tradition is destined to end.

Southland is about police officers and detectives in the LAPD. There are tons and tons of cop shows on right now (most on CBS). So why should you watch this one? Four reasons. (1) It feels more real than other shows. The dialog uses real profanity bleeped out. This is uncommon for a scripted network show. Censors would never allow this ten years ago. I think the proliferation of reality shows has created the environment which allowed this change to occur. (2) It's far more character driven than most. Solving the case and catching the bad guys isn't as important as the development of the cops and detectives. (3) Benjamin McKenzie. The super cutie from The OC stars as the rookie cop whose first day was the pilot. He looks great in a uniform. (4) And finally: gay cop! The OC rookie is partnered with big and hot Officer Cooper. He also played a cop on LOST as Ana Lucia's partner. He was seen drinking a beer at the end of the first episode in an obvious gay bar. I'm surprised we didn't hear about this before the debut. Quite an awesome shock.

You can watch the first episode on HULU.com right now.

VH1, the never ending source of great 100 countdown shows recently debuted their newest, the 100 Greatest One Hit Wonders of the 80s. Here are the top ten:


If you only watch one, watch #3 Take On Me. It's not the real video, it's a spoof I found on CollegeHumor.com. It's very good.