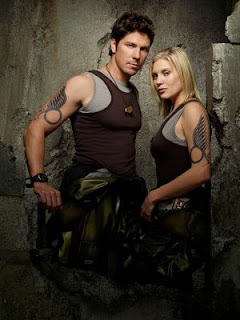 The last episode of Battlestar Galactica is on tonight. From the online guide it looks to be 2 hours and 10 minutes long. Hopefully your TiVos are all set properly. The last few episode have been really boring. Really boring. I'm looking forward to them wrapping it all up tonight.
Not only is it the last episode, but it is the last Battlestar. All but two Battlestars were destroyed by the Cylons in the miniseries. The Pegasus was destroyed in the battle of New Caprica. Now the Galactica is the last of its kind and it is dying. The years of war have taken its toll and it is literally falling apart. We all expect a big final battle for the old ship as they make a final raid on the Cylon homeworld or colony or space station or whatever they are calling it. It's the thing that looks like a giant shuttlecock near a black hole where they took baby Hera.
Also we need to find out the deal with Starbuck. Is she a Cylon-Human hybrid? Did the Ship of Lights reanimate her? Will she bring humanity to its doom? Will she create a successful overpriced coffee franchise?
And after the big final battle with the bad Cylons vs. the good Cylons, the final five Cylon, and the Humans, will the survivors finally find a nice place to live? Which characters will survive? Will god show his face and will it be Dirk Benedict?
Some of the cast has already moved on. Helo is on Dollhouse which tonight airs at the same time slot. Number Six was on Burn Notice but she died along with Daniel Jackson in the finale. Lee is on the British version of Law & Order. I hope we get that on BBC America. I hope to see the others in new shows coming up, especially Cylon Anders. He's dreamy.
# posted by Daniel Brown @ 2:29 PM