The Girls Who Moved Away From Next Door 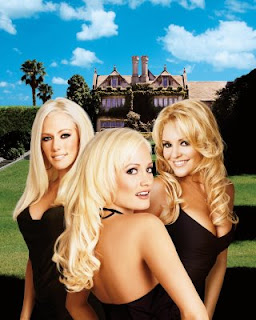 The girls of Playboy have ended their latest season and I'm more confused than ever. The show itself was fine but I'm confused based on the interviews Holly and Kendra had with Chelsea Lately. Holly said watching the whole season would make everything clear. Yet at the end she was still with Hef and she left for a trip to Vegas for a photo shoot. The Hef says he thinks she is unhappy because he's not going to marry her and give her a baby. It was never clear how and when she and Hef broke up. Also Kendra told Chelsea that there were some skanky bitches in the mansion while she was still there. We didn't really see this. Kendra's own show start on E! later this year.

At least we know about Bridget. She left the mansion to be the host of a new Travel Channel called Bridget's Sexiest Beaches. This starts next week and it will definitely be on my TiVo. Bridget is my favorite and I love travel shows and beaches.