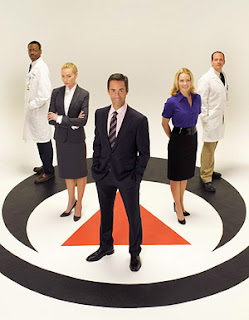 In honor of Ted's visit to Seattle this weekend, I recommend watching the new ABC show, Better Off Ted. It is available at ABC.com. If you had any doubts I will convince you in three words why you should watch: Portia de Rossi. The beauty from Ally McBeal and Arrested Development, aka Mrs. Ellen DeGeneres, co-stars as Ted's boss Veronica. The show is a half-hour single-camera no-laugh-track direct-camera-narration* comedy. *See below.

Here's a random list of stuff about the Teds:

*TV Show Narration styles:
Voice-Over Actor. Examples: Veronica Mars, Magnum PI. The main character also supplies the narration because otherwise you don't know what they are thinking.
Voice-Over Narrator. Examples: Arrested Development, Desperate Housewives. An all knowing narrator provides extra insight and/or jokes to the story.
Voice-Over Flashback. Examples: Wonder Years, How I Met Your Mother. Although similar to "voice-over actor" these is told from the point of view of one character in the future about events in his/her past.
Interview. Example: The Office. I think this is a unique format to The Office right now. Characters talk to a never seen or heard interviewer as if they were on a reality show. It is not clear to me if this is just a window into their mind or someone is really interviewing them. I need to watch more of The Office. My goal is to catch up on it this summer.
Direct Camera Narration. Examples: Better Off Ted, Ferris Bueller's Day Off. OK, that second example was a movie, but it was also a short lived TV show with Rachel from friends as Jeannie his sister. But I digress. This kind of narration has the main character talking directly to the camera and breaking the fourth wall. Also, Malcolm In The Middle.