Battlestar is Running Out 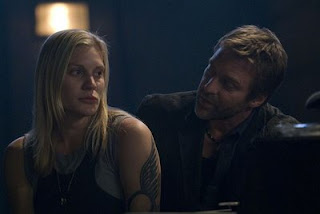 There are very few episodes of Battlestar left. They need to start wrapping things up soon. There are a few really big questions to be resolved:
1) Starbuck's story. She's supposed to lead humanity to its doom. But she has already died and come back from the dead. What's the deal here? I think this week we got a clue to her background. She had a vision of her father and I think he was Daniel, the number seven Cylon killed by Cavil. I think that makes a good conclusion.
2) The Importance of Being Hera. This poor little girl has been bounced around since her birth and fake death. Now Cavil and Boomer pulled off a very clever kidnapping and she's gone again. The next adventure is tracking her down and bringing her home. She will bring Hope and Change just like Obama.
3) A Perfect Place to Live. Planet Seattle Winter aka New Caprica kinda sucked even before the Cylons showed up. Of course before that they need to end the war with the bad Cylons.
4) Galactica's Disintegration. The ship is falling apart faster than a McMansion made by The Bluth Corporation. I think the Cylon hair gel came a little too late.