The Simpsons in Glorious HD 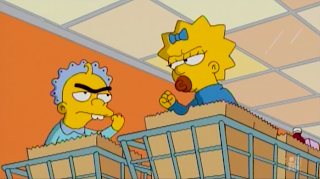 Yesterday was the last day to for non-HD over-the-air broadcasts. Starting today the switch to high definition will be complete. Of course people with cable and satelite had all the hardware switched on the source end so I didn't need to do anything. The Simpsons picked a perfect time to switch over to HD. The broadcast season of the Simpsons and the production season do not match up. While Sunday looks like a mid season episode of the 20th season, it was in fact the first episode of the 20th production season. And what a perfect time to make brand new opening credits. After 20 years the old credits seemed so, well old. The new title sequence has updated characters, lots more of the city, and more jokes. Sheri and Terri are text messaging during music class. Jimbo and Kerny are cutting off the head of the statue. Apu's eight kids join him for the first time. Maggie's nemesis appears in the adjacent cart in the grocery store. And they debuted the new starting with a lengthy new couch gag. The couch ran away and the Simpson family had to give chase all around the world and into orbit. Good job Simpsons creators! Welcome to the digital age.

Comments:
That's so weird. I though something was different but I don't watch enough to actually know.