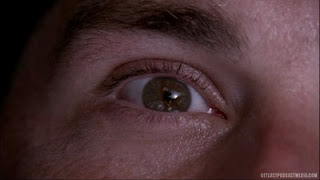 I have to say I was very surprised to have the Oceanic Six back on the island in only the sixth episode of the season. I thought the entire season was going to be about them getting back. Of course it still is going to be that. This move just allowed them to return the their normal formula of character flashbacks instead of the real-time shows we've had this season. Also for an episode which was expecting to answer many questions there were more new big questions created than any episode since the second season finale. Don't expect many answers tonight. This one is all about what Locke did between leaving the island and ending up in the coffin. It should be enlightening but no new island questions of scenes are expected. My favorite part was the opening with a close-up of Jack's eye which is exactly how the pilot opened so many years ago. Here are the new questions:

How did they get from the plane to the island?
Why are Kate, Jack, and Hurley seperated from Sayid, Sun, and Ben?
Ben said he couldn't return to the island. Will he be able to?
Did anyone else from the plane come with them? Frank?
Why did they need to recreate the circumstances of the original flight?
What happened to Aaron?
What changed Kate's mind?
How was she able to leave the country since her terms of murder trial prevented her from leaving California?
Why is Sayid in handcuffs?
Who is taking him?
Why would he be going to Guam?
What made Hurley change his mind?
Why is he bringing the guitar?
What will happen to the other people on the plane?
What will happen to Locke?
Why did he kill himself?
What happened to Ben that left him beat up and covered in blood?
What happened to Desmond?
Why didn't Aaron have to be on the plane?
Why didn't Walt have to be on the plane?
How did they end up in Dharma time?
Did all of them end up in Dharma time or are they spread out through time?
How long have the time travelers been in Dharma time?
How did the time travelers integrate into the Dharma Initiative?
If Widmore knows the location of Ms. Hawking, does he know about The Lamp Post?
Why hasn't he used it to find the island?
Why Dharma leave the Lamp Post?
Why haven't they returned to it?

That's a lot of questions. I guess the final question is where am I going to watch LOST tonight? I still don't have ABC.