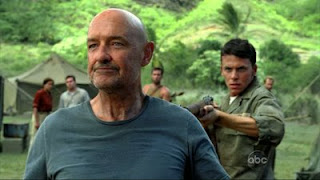 The third episode this season skips over the Oceanic Six gathering in Los Angeles for the very special adventures of Desmond and Penny. This had to be the Desmond episode so the appearance of young Charles Widmore would coincide with a big Widmore episode. Most of Desmond's story was reminder filler story so we could remember what Daniel was doing at Oxford and how it was similar to the plight of the survivors. But the big story is of course about Widmore. We was part of the Others back in the 50's. This predates the Dharma Initiative. He clearly knows a lot about the island since he funded Daniel's research on time travel. It also appears the Others didn't have any possessions. Their camp, clothing, and guns are all taken from the US Army. In modern times they live in captured Dharma housing. Who are these people? Clearly Richard has been there forever but what about the other Others? This mystery is deepening. But the nosebleeds are taking a turn for the worse and Charlotte passed out in the cliffhanger ending.

Here's what we learned:
And more new questions: