I Can't Avoid the Snow 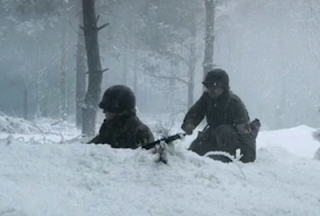 The snowpocalypse is upon in Seattle, I just can't seem to avoid snow even on TV. This morning I watch an old episode of Girls Next Door I had missed from last season. The girls went Snowboarding in Vale. I was the best type of GND episode. The girls, this time without Hef, go on an adventure together. Bridget cared most about looking super cute in her ski outfit while Kendra tried to zoom down the mountain and learn new snowboard tricks. This season has had some good adventure type episodes, but the ones where they search for a new anniversary playmate were super lame. More adventures! More Vegas!

Anyway they I went to the gym and continued watching my latest gym show on my iPhone, Band of Brothers. I was on part 6 of 10. This episode was in the height of winter in Belgium. The miniseries has been really good although it can be very bloody at time. Kill those Nazis! As you know, there were no good Nazis.