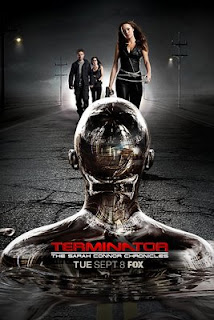 Of course it is the Sarah Connor Chronicles. I can just hope Palin gets terminated in the voting booth. The Terminator show is on again tonight. If you like action shows, this is the show for you. It's a little more realistic than Prison Break and 24. The cast is great. Brian Austin Green is a great addition as John Conner's uncle Derek. His brother was Reese from the original movie. The show is basically a terminator of the week premise. The terminators tend to get continuously sent back for specific missions, like kill the guy who will save John Connor's life or meltdown the nuclear plant which becomes a asset for the human resistance in the future. In addition there's a new T-1000 shape shifting Terminator whose goal is to get Skynet online. Since it can't bring any technology back it is reverse engineering the other dead Terminators taken out be Sarah, John, Derek, and their own Terminator. I don't know why she didn't come back with her own Terminator as spare parts. Unless she is working on a different agenda. After the machine turn against the humans they always eventually turn against each other.
The last new episode two weeks ago was presented with minimal commercial breaks by Ram. Their commercials were a reality show where four teams of hot guys compete in the Ram Challenge. I like the firemen team.