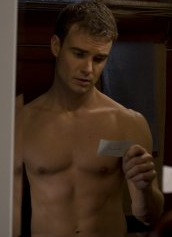 It's not very often that an entirely new concept gets a green light for a series on SciFi. Sanctuary has it's third episode tonight. Not only is this an original idea (not a spin-off, movie adaption, or re-imagining) it is using an entirely new production process. The show has its basic sets but many of the large spaces and almost all the outside shots are totally virtual. This allows them to have these huge sets without the cost. Babylon 5 did a lot of this but this is almost entirely done virtually.

The other thing you should know about Sanctuary is the recycling bin for SciFi actors. Obviously Col. Carter is the main character, the ageless Dr. Mangus. The daughter and the tech guy both had small recurring roles on BSG. The Jack the Ripper recurring bad guy played several characters on Stargate: Atlantis including Todd the Wraith. Maj. Lorne also from Atlantis plays the skeptical police detective in the pilot. And Dualla from BSG also showed up in the pilot as the new guy's ex. She may be back.

Speaking of the new guy, Dr. Zimmerman. He's the guy in the photo. Hopefully he'll take his shirt off more. Once again we see a SciFi show bring in "the outside guy" so that the secrets can be explained to him and the audience at the same time.

What are the secrets? What is the Sanctuary? It's a little part Buffy and a little part Heroes. People have powers. Mutants creatures roam the Earth preying on people. Magic exists. The Sanctuary is where the outcasts come to escape persecution or where they baddies get locked down.