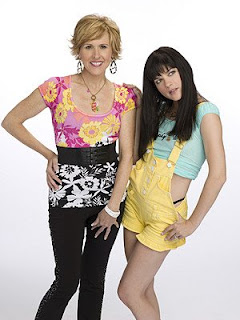 I love Molly Shannon and I love NBC comedies. For this reason I'm giving Kath and Kim a chance. Normally I don't like shows about unlikable or stupid characters. I stopped watching Seinfeld and Cheers because the characters were just too unlikable. I can't watch the office because it has unlikable and stupid characters in very uncomfortable situations. Kath and Kim looked like just another version of this from the cover. But underneath I found a very funny show about four people who go to the mall all the time. The second episode was much better than the pilot as Kath tried to compete in the Prom-enade at the Promenade, a showcase of hair, make-up, and fashion for the Prom. Look at Kim, she's a model, in space. OK, that joke was just for one person, but I'm still glad I put it in. The third episode is on tonight after Earl.