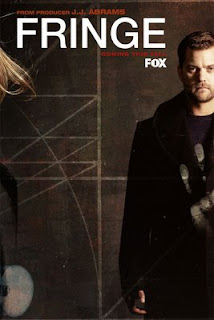 It's that show about strange happening in your refrigerator. It's spooky. No, it's really Fringe on FOX tonight. Fringe is the new show by JJ Abrams and everyone loves comparing it to his previous projects like LOST, Alias, and Felicity. I don't think there were many melting faces on Felicity. The connection I'd like to draw between them is they are all one word/name titles.

But anyway Fringe has been on for a while now but I still don't know if I like it or could leave it. The mad scientist is a refreshing character for television. The guy from Dawson's Creek is good. The blonde chick is a believable FBI agent. I'm not sure if the show is going to be too gorey.

Even though this show takes place in Boston, it is shot in New York. Lots of shows are filmed in New York City these days thanks to a nifty tax incentive. It's easy to film in Brooklyn and angle out the Manhattan skyline and make it look like any aging East Coast city.

There's a few things I love about the show. The first is the huge floating letters establishing the location of the new scene. The second is the bumpers to the commercial break telling me how long it will be. "Fringe will return in 70 seconds." Sometimes I don't even grab the remote.