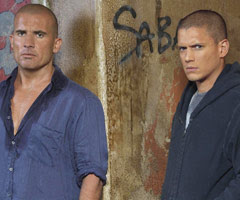 I'm totally not ready for the new season. My TiVo is ready. Right now there is only three episodes of Days of Our Lives, the most recent Project Runway, and the final episode of Starter Wife which I've already watched half of. But the new season is flying off the shelf and I have been delinquent in blogging about it. FOX broke 2008 fall season’s cherry with the debut of the fourth season of Prison Break. The setup for the new season was quick: Scofield has put together his crack commando unit to steal the secrets from the mysterious “Company.” Those are the same folks who killed his dad and the vice-president and framed Lincoln (who is looking hotter than ever). Included on his list are Lincoln (of course), former cell-mate and baby daddy Sucre, the former FBI bad guy, the former prison guard bad guy, and the former dead doctor Sarah. It looks like its going to be a good season and I’m going to overlook the fact that Scofield was let out on bail before he decided to go along with the FBI’s plan. Seriously? He escaped from jail! There’s no arraignment, no trial, and no bail. He would have one directly back to jail. The best thing: laser tattoo removal. No more long sleeves in the tropics for Scofield.

Also debuting this weekend was 90210. I somehow completely missed this but luckily it will be on again tonight on The CW. In all fairness the CW also tied FOX's cherry breaking debut with Gossip Girl and One Tree Hill. I guess this season was double penetrated like an Alaskan teen.