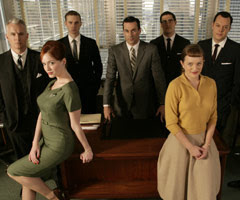 I have finally caught up on the AMC critically acclaimed show Mad Men. This is the show with the most Emmy Nominations for a drama this year. (30 Rock got more, yay!) It also has gotten the most hype of any summer show despite the fact that Burn Notice gets the highest ratings. After watching all of season one and season two to date, I’m not impressed. This is a one joke show: “Look how stupid we were in the 60’s.” It gets old. People are constantly smoking, constantly drinking, constantly driving without seat belts, and sometimes smoking, drinking, and driving without a seatbelt. The most interesting story was the mystery of Don/Dick. The main character is Don Draper stole the identity of his dead commanding officer while on a mission in Korea. His real name is Dick. It was a cool mystery that kind of fizzled out and then the secret came out and nobody cared.

Sometime I think this show might just be a way to add the least offensive product placement into a show ever. American Airlines, Clearasil, and Maidenform all got huge exposure this season. A lot of the cable shows are really selling out to product placement. I'm not complaining, I like it. It can add to the humor with the guys from Psych go to Red Robin for lunch with the restaurant name EVERYWHERE. Eureka's big sponsor is Degree for men. I think they wrote an entire episode about this. They did a groundhog day story and the sheriff was constantly waking up and putting on his Degree for men every time the time loop repeated. It looked like Burn Notice was doing a big car placement with Audi or something but they dropped that early in the season.