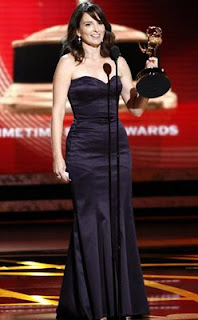 Last night was the something-something annual Emmy Awards. I didn't watch it as I never do. I loath award shows. The Emmys gets way out of control with the number of categories. Every year there's like two more. Did you know they have an award for best casting. How does that require skill? Wow, you did a great job watching people audition. How about best craft service table?

Like last year the big winner was cable. In fact all the major drama awards went to cable shows. 30 Rock rocked the comedy category taking home the top three awards. The only major awards CBS got were for their reality shows. I'm sure they would win if there was a category for best procedural cop show set in Miami. Otherwise they suck. Here is the list:

I think Mad Men deserved it because they award based on one episode, not the entire season. The pilot was the nominated episode at that was one of the best hours of television last year. The show can't really hold up because it is a one joke premise: "look how dumb we were 48 years ago." 30 Rock is the funniest show on television and I'm glad other people think so.

I would also like to make a special congratulation for Pushing Daisies first minor Emmy. They won for Best Musical Composition for the episode "Pigeon". That's they episode where they starting singing "Birdhouse in Your Soul" while driving to the windmill farm. It was wonderful. Watch it here:

Comments:
I didn't think Jeremy Piven was in a supporting role in that show. Isn't he the leading man? I've never seen it though. (Wouldn't it be funny if he was the leading man and someone in Hollywood saw this comment and was like "oh my god" and then there was this big commotion.)

Anyway, that musical number was one of my favorite moments from last year. And I feel a bit like the Jean Smart thing came out of left field, but I love her, so I'm happy.