Since I was neglectful about the usual individual episode postings I like to do, I'm going to do a series of Season 4 wrap-up post. This one is mostly about the LOST timeline but also a bit about the finale. 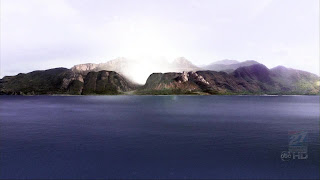 I was very satisfied with the way LOST ended this year, more so than any previous season. This is the way shows should end the season. In all the past seasons of LOST, the next season began at almost the exact moment from the season finale. This is how most cliffhangers work. It’s useful but it’s not my favorite way of doing things. This season LOST had what I call a Buffy Ending, and it was great. A Buffy Ending is when the season ends and the large season arc gets resolved in the finale. In Buffy this meant the destruction of the “Big Bad” of the season. This is usually coupled with some additional smaller cliffhanger for us to ponder over the summer, like Buffy running away, or Buffy dying, or (surprise!) Buffy has a sister. The fourth season of LOST essentially wrapped up the large story arc set down in the pilot, “will the get off the island?”, left some mysteries unresolved, and completely set up for season five’s main arc: getting back to the island.

This goes along with the biggest shift in the show that results from this episode: breaking with the timeline. From the beginning there has been one narrative coupled with flashbacks and flash-forwards. But the main timeline from the Pilot to “There’s No Place Like Home, Part 3” played out day by day for 108 days. BTW, 108 was the number of minutes between pushing the button at The Swan and it’s the sum of Hurley’s lotto numbers. So as excited as I am to find out how they get back to the island and how/why/if Locke really died, I’m interested to see where they will start the timeline for season five. I think they will start from or shortly after the coffin meeting. Flashbacks and possibly flash-forwards will branch off from this timeline. We will uncover what happened on the island and what else the Oceanic Six have done from arriving on the beach in Indonesia to the coffin meeting. It’s going to be a very exciting season, too bad we have to wait until January.