This season saw lots of newly dead. Some where sad, some were celebrated, some were shocking, and some were unnecessary. 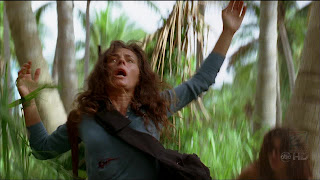 Danielle Rouseau. She was crazy but she was also Deleen. I was happy everything she showed up. Sadly she was killed by the mercenary team. I’ll miss her. She probably won’t be back in a flashback.
Karl. We never really got to know what his deal was. How did he get to the island? Were his parents there? Why was Ben brainwashing him in Room 23? He’s dead now so we will probably never know.
Alex. “Where is Alex?”, the first words spoken by that crazy French women was the first evidence that there were Others on the island. Over the years we met Alex and know her full story. I was completely shocked when Keamy executed her in front of Ben. This set Ben off on him quest to find and kill Penny. I hope he never succeeds.
Captain Gault. He wasn’t in many episodes but he was the hottest guest star this season. Though some would disagree and say it was:
Keamy. The mercenary character who goal it is to kill everyone isn’t likely to survive the season. He did survive the smoke monster and getting shot by Richard before getting killed in the Orchid. I was wondering if he left radio contact would the bomb explode or did his device send a signal once he was dead. If they were deep underground, how did the signal get broadcast? 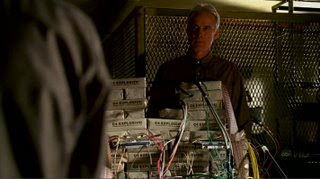 Michael. While he needed to die to atone for the killing of Ana Lucia and Libby, I would have liked to see him and Walt be reunited. Although with the presence of Jack’s Dad, perhaps he is joining the ranks of the Undead. Walt and Michael may yet be reunited if he returns to the Island.
Jin. This I found this death to be unnecessary. I hate it when characters are killed for no reason. It is my hope that he survived the explosion and made it back to the island radius to be moved with it. This seems unlikely since the helicopter flew from the wreck to the island and missed the movement. However that could have been because they were in midair. Jin still could have survived, but probably not. Maybe he could be undead too. I just hope that whatever Sun is doing is super important and something she wouldn’t have done had Jin survived.
Claire. Is she dead? She was hanging out with the Undead Christian so she might be. But non-dead characters can see Christian so perhaps the Island is just protecting her from the Battle with the Freighter. Either way, she is currently Lost.
Daniel. He was on the zodiac when the island moved. Was he close enough? Most likely since the helicopter raft never encountered them during their time before Penny’s boat showed up. 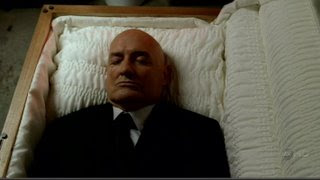 Locke. He’s dead in the future. His official death is suicide. Was he killed or did he really kill himself? Why does he have to go back to the island with the Oceanic Six? Will the island bring him back to life?
The Rest of the Freighter People. The Doctor, Minkowsi, the chick with the chain, and all the mercenaries. Widmore is going to go recruiting.

Comments:
Looking at this list, I can't help but think, "This is soooo JJ Abrams."

I JJ's worlds nothing good can last, including people. When he was a kid playing with his dolls I'm sure they would start off getting along but within 5 minutes all of the dolls would have killed each other.

This is very heavily starting to turn into another Alias. Where everything goes topsy turvy and things are confusing only for the sake of being confusing. Characters lose their defining traits. And the show becomes a mish mash of betrayals, sadness, and gloom.

I mean, aside from the really bad guys, like Keamy, nobody really had to die. They're just dying for the heck of it.