Kathy is Blowing Up My TiVo 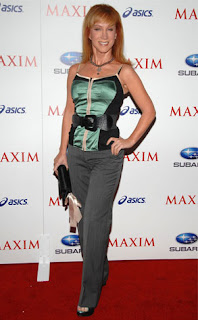 Kathy Griffin is blowing up my TiVo. Repeats of season 3 of Life on the D List were on all morning. I watched some before work. My TV is also my alarm clock so I woke up during Kathy’s date with Ron Jeremy. It was unusual. But tonight is the start of season 4 of Life on the D List. Yay for Kathy. The half hour before her show is the red carpet special for the special Bravo A List awards, which comes on after the season premier. It’s just Kathy Kathy Kathy, all night long. Yay!

In more Kathy news, her next Seattle show goes on sale on Saturday. The show is on 11/20/08. I took a look at the ticket price and Holy Fuck Balls! Tickets that were $42 last year are now $72! With the insane ticket master fees it’s going to be like $90 per ticket. I’m still going. Plus I just found out that Kathy is performing in Las Vegas while I’m there this summer. Yay for me!

My final Kathy news is my super famous YouTube clip from Kathy’s penultimate appearance on The View last year. It’s the third highest most viewed Kathy Griffin video, after her Today show rant on Ann Coulter and the Eminem video she appeared in. View count has been up recently and so has the comments. Most are favorable but there’s this one odd fish who keeps claiming Kathy is Jewish and immoral. I wish people would stop imposing their beliefs on Kathy. She's a free spirit. Yay for Kathy!