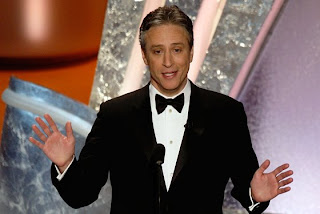 I'm super glad the Writer's Strike was over well before the Academy Awards. That way there was no way they could blame that trainwreck on the absence of writers. The problem is movies suck. Of the five movies nominated I only saw one, Juno. I didn't think it was even close to Oscar worthy. The title character deserved an acting nomination but the movie itself had some fundamental problems. The biggest of which was the inconsistent narration. I'm not a big fan of narration to begin. It is a lazy way of telling the story. With Juno the narration began well into the film and was from the point of view of Juno. This denotes it is her story and thus we shouldn't see all the scenes without her in them. The winning film was about some random killer and no one saw it. A big majority of winners were not Americans. Unknown films, unknown winners, too much build up, and too many other award shows conspired to make the Oscars the least viewed show in the history of all time. The Academy needs to start nominating popular films if this venue is going to persist. I suggest letting it die.

The best thing about the Academy Awards was the first episode of The Daily Show were they blamed the low ratings on Jon, claiming not even his mother watched it. It was very funny.