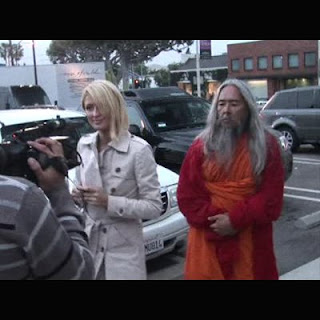 E!'s new show Pop Fiction is on tonight. It debuted last Sunday. For weeks they have been publicizing it but not saying what at all it is about. Last week we say its a practical joke show where the target is the paparazzi-stalkarazzi-blogarazzi industry. They create fictional stories for the celebrity news to consume. Do you remember a few weeks ago when Paris was photographed with a "guru"? That was fake and set up by this show. Yet the media consumed it and spit it back out. Chelsea Lately did a whole bit about it where she had Chuy dress up like a guru for the show. Even she was fooled and its on her network.

The funny thing about this show is they can't (or have yet to) show you what the new episodes are about before they air. That's part of the premise of the show. If they let you in on what it was about, it wouldn't have that middle-finger-to-the-media factor. It's a funny show.