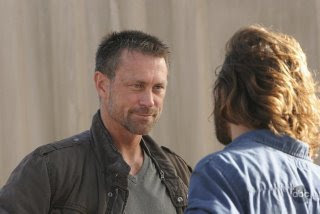 The producers gave us a new flashback format: the flashback-flashforward combo. They are very tricky. There were several clues I picked up on but didn't make the conclusion. Jin had a crazy old cell phone. Also he had his old bad and violent attitude he gave up after the crash. But he's dead now. With Sun flashforwad we have a bit more clues to the rescue timeline. Sun is now over two months pregnant so her birth is going to be in summer of 2005. This means the Oceanic 6 will be rescued in the first half of 2005. Here's what else we learned:
And new questions:

Comments:
I have somehow developed a crush on Jin. Therefore he can't be dead.