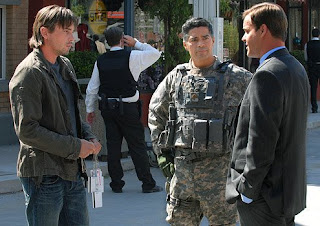 Jericho was cancelled again this year. Last year it left with a startling cliffhanger and the fans rallied to save the show. CBS gave them a second season but then cancelled them again. The series finale airs tonight.
I'm glad they had a second season to tie up to main mystery of the show, who was responsible for the bombs. It turns out it was Halliburton. Well not really but the similarities between the fictional Jennings & Rall and Halliburtor are obvious. J&R became a big fixture this season in helping rebuild the western part of the country, reformed into the Allied States of America. They are embedded in the core of the bureaucracy and will end up owning almost everything. But it seems it was just one man in J & R who put this all together in order to eliminate J & R and what he saw as the corrupt government. We haven't seen this guy yet but we hear him on the phone. Tonight in the series finale, the mystery voice guy has stolen the last bomb and is planning on taking out Cheyenne, WY, the capitol of the ASA.
I heard they shot two different ending depending on whether or not they were renewed. Since they were cancelled we'll see that ending. There is no fan cry for renewal this time around.