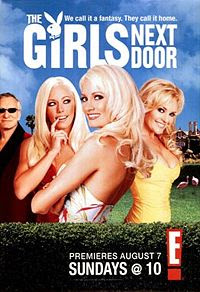 The first time I caught a segment of The Girls Next Door on TV, I was shocked. And it takes a lot to shock me. There was so much nudity. It was an episode where the girls were making a new Playboy shoot. They were strategically blurred but at first glance it looked like a bare naked lady on basic cable. Later when I was talking to friend of DtvB Matt, I was told this isn't what each episode is about and he likes the show. So I gave it another try and then made a season pass. Here are the reasons a Goldstar gay boy like me watches a show about Hugh Hefner's girlfriends.

1) It is a very well produced Celebreality show. Each episode has a story that flows to a satisfactory ending. All the themes of each episode make sense. And it doesn't really seem scripted. I know all these shows have some level of scripting but this one isn't as noticeable as Hogan Knows Best or Scott Baio is...
2) The girls are all different and they all get along. Holly, Bridget, and Kendra all have very different personalties. Unlike what you would expect when three women have a herem style relationship with one man, there is no backstabbing or in fighting. In fact they get along so well many of the episodes are about their adventures without Hef. There was just a two part Jamaica episode with an occasional phone call to Hef back at the mansion. I don't know what Kendra does all day but Bridget is working on a career in radio and Holly has become a very good photo shoot producer.
3) I love Mary. Mary O'Connor is the antithesis of the girls. She is Hef's longtime personal secretary. The best word to describe Mary is dowdy, although she would probably prefer matronly. All the craziness of the Playboy Mansion and she never does a double take or clutches her pearls. Plus her husband makes a mean baloney sandwich.
4) This show is the best example of what women will do for money and security. All these women are in their twenties and Hef is 81. Their combined ages are less than him. Holly completely believes that she and Hef are going to get married and have kids. He's 81! He already has two failed marriages and four kids, it's not the time in his life to have more kids.
5) Hef is hilarious. His routines are so rigid. He has to have his soup meal at the certain time in the afternoon. He doesn't like changes to the mansion. He has a huge staff following him around making sure he is comfortable inside and outside the mansion. He is a true rich eccentric like the ones from old movies.
6) It has the best theme song of any reality show ever. "Come on a my house a my house, I'm gonna give you caaaaandy." I want that on my iPhone. In fact, after publishing this I'm going to go search iTunes for it.

Comments:
I will be forever thankful to Hef for introducing me to the concept and term "soup meal". At first, the personal trainer in me was horrified that he was just eating soup. Even with meat, soup isn't very nutritious (it's like a non-food, neither good nor bad). But when I found out he also ordered hard boiled eggs I was happy that he was getting some protein.

I totally agree, the show is hilarious. When I first saw a friend watching it I said, "what IS this crap??" (I also thought the same about "Sex and the City" until I watched that too)...and I finally watched an episode and loved it. It also kind of changes your view...people think these "bunnies" are just dumb blondes who run around naked all the time...but they're not dumb (though Kendra can be ditzy), and they actually do stuff, like you said Bridget with her radio and master's degree, and Holly and her photo editor job...very cool. Though you're right, not sure what Kendra's doing...renting her condo?