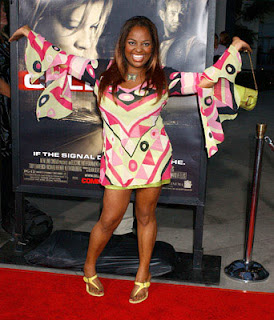 Today on The View it was announced that Sherri Shepherd would be joining full time as the fifth co-host. All last year they just had four which meant when Barbara Wah-wah was off, they would have a guest host. Now they don't need to. I think she's going to be good on the show. I wasn't a big fan of hers last year when she talked about getting back together with her husband after he cheated on her and had a baby with another woman while they were married. But now she gotten wise and left his ass. Good for her. She show is getting pretty heavy on the comediennes which would make it even more fun to watch.
# posted by Daniel Brown @ 4:04 PM

Comments:
The VIEW now has 2 AIR HEADS...Sherri Shepherd and Elisbeth are horrible for the VIEW.
Sherri Shepherd is LOUD and UNINTELLIGENT. She talks about herself and her personal life TOO much. Sherri reminds us of Kathy Lee Gifford when she was on Regis. Sherri won't last. Whoopi is GREAT for the SHOW. She is WELL READ and intelligent.

I THINK PEOPLE NEED TO BACK OFF ELISBETH.THERE IS NOTHING WRONG WITH DEFENDING YOUR PRESIDENT,COUNTRY AND TROOPS.IF YOU CALL YOURSELF AMERICAN THEN START ACTING LIKE IT.TO MY FELLOW REPUBLICAN-ELISBETH KEEP UP THE GOOD WORK.ALWAYS STAND YOUR GROUND.KEEP YOUR VALUES AND MORALS ALWAYS.LET NOONE STEP ON YOUR BELIEFS.ROSIE SUCKS.

I THINK SHERRI IS A GOOD ADDITION TO THE VIEW.ALOT BETTER THEN ROSIE.AT LEAST SHE LOOKS AT THINGS FROM BOTH PROSPECTIVES.ROSIE WAS A ONE-SIDED PIECE OF CRAP.ANYONE WHO WOULD CALL OUR TROOPS TERRORISTS.DOESN'T DESERVE TO BE AN AMERICAN CITIZEN.HER BOOK WILL BE A PILE OF CRAP ALSO.SO SHERRI KEEP DOING WHAT YOUR DOING.GOD BLESS OUR TROOPS!

Where do these crazy women find my blog? I wonder if Kelly Blalock was defending Clinton when he was president? Calling people un-American for differing with your political opinion is the most un-American behavior. Why can't these crazy bitches stick to the subject: Sheri Shepherd.