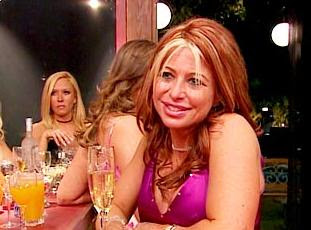 I watched the two new VH1 Celebreality shows, Scott Baio is 45... and Single and Rock of Love with Bret Michael and I have to say, woman are crazy. Especially on Rock of Love. This is a similar format to Flavor of Love, but with someone who is not completely gross. Bret Michael was the lead singer of Poison. The show started with 25 women and his body guard got to kick 5 out immediately. One decided to crash the show anyway and banged on the front door until they let her rejoin the show. All the other girls assume she had to blow the body guard to get back in. I would be surprised if that wasn't true. She ended up not getting eliminated either. But since there was now more people than beds, she has to sleep on the floor. She crazy. This other big boobed blond girl was also crazy. She kept butting into Bret's conversations with the other girls and kept calling him her man. As Tom Leykis says, "Women are attention whores." She certainly is and her possessive ways almost got her eliminated. I think she read The Secret one too many times.

On the Scott Baio show, he starts this program with his life coach to examine his past relationships. His current girlfriend is all upset that he starts this so close to the 1.5 year anniversary. Who is that sensitive about the 1.5 year anniversary? Crazy women, that's who. Of course this show also has it's share of crazy men. Scott's entourage is rather crazy.
Tonight another crazy women has a crazy show I can't even imagine watching: Victoria Beckham, Coming to America. Now I watch some really bad crap, but this is just too much for me. Why is she on NBC? Why is she famous? Who is she? Go home already!
# posted by Daniel Brown @ 2:16 PM

Comments:
Well #^@% you very much Daniel. Thanks to this post now I have three more shows to add to my TiVo.

When did train wreck TV become the new dramedy?