I have a good friend, who I won't name, but Matt goes to the gym almost everyday and works out with a trainer. This is now the biggest passion in his life. Matt (who shall remain nameless) gets really anxious and irritated and cranky if he doesn't get to work out when he is ready to. When we were discussing this at lunch one day I said, "Oh, you have gym blue balls." He totally agreed.

I know how he feels because occasionally I get TV blue balls. When I have a show on TiVo that I'm excited to watch and then I turn it on and for some reason or another its not there, I go into a mood that can only be described as anxious and irritated and cranky. This last happened with the finale of 24 this season. My TiVo recorded only minutes but it looked like it recorded something so for weeks I watched the other episodes, watch the long list of episodes dwindle down to just one and then wham! You don't get to see how this season ends. I was in a very bad mood all that day. 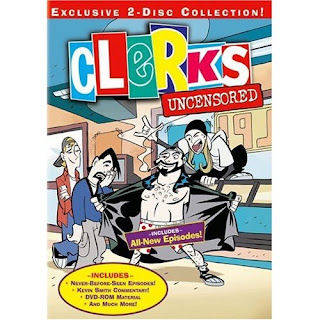 It happened again to me today and this time it is NetFlix's fault. For a while I have had Clerks: The Animated Series in my queue but recently I moved it up. Disk one of the two disk series arrived yesterday. I was excited to watch this when I got home today. I got all prepared to watch it and put in the disk and them wham! It was the wrong disk in the jacket. Now I don't know when I'm going to get to see it. I have to send it back tomorrow. They will get it on Saturday. Monday they will try to find the actual disk which may be out with someone else. If they find it they might send it as early as Tuesday so I wouldn't be able to see it till Wednesday. Pretty much my whole night is ruined now. I feel the need to drink heavily.

Comments:
Oh great. I TiVoed that stupid Victoria Beckham show and it recorded another show instead. And it's not going to be on again! I want my DisasterTV!

do you wanna borrow my copy?