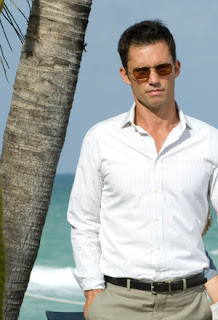 I found a new summer show that's good: USA Network's Burn Notice. It's a detective, spy, action-comedy. The show resolves around the main character Michael Westen, a spy who was fired and dumped in Miami. Spies are fired with burn notices, thus the title. I like the show because it has clever stand-alone stories each episode. Slowly weaved into the case of the week he is slowly gaining resources and finding out who is responsible for the burn notice. It also has some great characters such as his mother played by the fantastic Sharon Gless. What I don't like is the over-use of voice-over. I'm never a fan of voice-over, it's writing for the lowest common denominator of audience. I think they could use a little less and also be more consistent with the freeze frames, which I think are fun. And this show is actually filmed in Miami instead of passing off L.A. as Miami. I can always tell.
# posted by Daniel Brown @ 2:34 PM