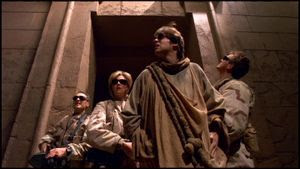 Last week Stargate:SG1 ended its tenth and last season making it the longest running sci fi show EVER. Now that it's over, let's look at what the world was like when Stargate:SG1 began on 7/27/97.
When I watched the first episode (which debuted on Showtime) I thought it was going to be one of those shows where they were trapped on other planets and each week went to a new planet trying to someday find their way back to Earth. Luckily it was a bit more well designed than that. The first season was a bit annoying with their technology teasing each week. They'd find some cool technology, then loose it by the end of the episode. It got old real quick. That's why I loved the way the show ended. The most advanced an benevolent aliens decided to give all their technology to the SG1 team. Hooray for the little grey aliens, may they rest in peace.

We still get to look forward to two more SG1 movies as well as more seasons of Atlantis and maybe one more show in the future.