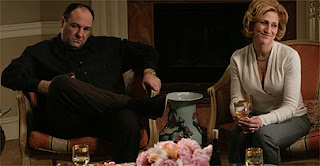 Tonight is the last ever episode of The Sopranos. I don't get HBO so I won't be watching. A few years back I started watching it on DVD but gave it up part way into the second season. There are two reasons for this. (1) It was starting to effect my language. My friend Sean told me it might when I told him I was thinking of watching it. My vocabulary noticeably started to contain many more varieties of the word fuck. (2) It has no redeeming characters. I like to be able to identify with the characters I watch. Even if the character starts off good and turns bad (or turns into a jerk like Jack) I still enjoy watching. Only the therapist of the Sopranos was not a complete waste of a human being, and she only interacted with Tony. When I turned the last disk I was watching, I had no desire to get the next. If there is any TV god, all the characters will die in tonight's finale. Good riddance.