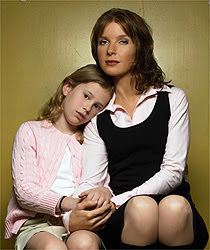 The 4400 season 4 started on Sunday. If you missed it, watch it online here. I love the fact that there a new shows in the summer now. Lately the trend with cable shows is to move a summer show to the fall when it becomes successful. Nip/Tuck and Battlestar Galactica are the biggest examples. The third season of It's Always Sunny in Philadelphia was moved to September this year. Luckily The 4400 has stayed in the summer for a fourth year.

Last season was a big one. We learned a lot more about what is going on. The big story last season revolved around Isabelle. We learned that the future people who originally took the 4400 were involved in a conflict and the other side send Isabelle in order to destroy the others. Scientists then figured out how to make give everyone special abilities. The season premier started out with a back-to-basics story of a 4400 ability going out of control as well as touching on some of the unresolved items from last seasons finale. It looks like the battled for promicine is going to be the major arc this season.
I wonder when viewers will tire of mutants. This show is doing well. Heroes is busting out with great ratings. Pain Killer Jane is running out it's first season on the SciFi channel. And movie theaters never seem to get enough of the Marvel mutants: X-Men, Spiderman, and The Fantastic Four. While these are all fun, it would be nice to have a space ship sci fi show or movie again.
# posted by Daniel Brown @ 3:05 PM