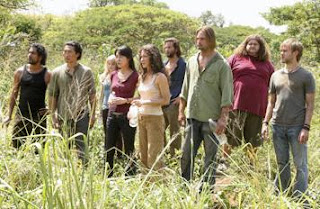 The problem with the end of the season is so many episodes actually take place within one day. The current day is 12/22/04. They are so close to Christmas I keep wondering if anyone will notice. It would have worked perfectly for this one since one of Charlie's flashbacks was a Christmas flashback. I both loved and hated the flashbacks from this episode. Usually Charlie flashbacks suck, but these were good: they were short and necessary for the current story. What I hated was the second flashback. The second flashback was from Karl. This was just lazy story telling. They could have easily had this as the teaser opener, but instead they put it later as a flashback. And how could we have seen all that since Karl was given the story of what Ben said and did second hand through Alex. I hate when they are inconsistent.

Speaking of inconsistency, what is going on with Desmond's flashbacks? He saw Charlie in the Looking Glass station and then drowning. Up until now all the things he saw in the future were things he would eventually see in person. If he didn't follow Charlie into the Looking Glass, how could he have seen these things? Maybe we will find out in the finale

And one more thing bothered me about the episode. The Dharma Swan station was generally referred to as "the Hatch" because they found the top escape hatch first. The survivors began to refer to the other stations as hatches because of the this. The Others and the Dharma folks always called them Stations, yet the blue prints for the Looking Glass Sayid got from The Flame calls it a Hatch. What the Pho? Also Desmond called it a hatch, but that might have been due to his cohabitation with the survivors.


OK, here's what we learned:


Here are the new questions: