Elisabeth thinks Rosie is a terrorist

OK, maybe not really, but it is clear to everyone watching The View and Rosie that Elisabeth agrees with the Bushies that Rosie called our troops terrorists. Rosie asked her again point blank and she wouldn't answer with a simple yes or no. When asked in the past, she avoided an answer. This is not at all surprising behavior for Elisabeth. She has continuously spouted Republican talking points without bothering to form her own opinion. Here, her first hand knowledge through her friendship with Rosie is at odds with these talking points and her brainwashed little mind can't deal with it. And how does she react? With lots and lots of anger. I've never seen her so made on the show before. She has a lot of anger inside her. I feel very sorry for her husband and kids. It will be very sad day for that family when she finds out her husband is cheating on her. Someone is going to the ER. 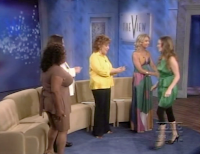 The best thing was watching her boil over after Alicia Silverstone totally disses her on air. When coming out on stage, Alicia (my new hero) walks right past her and greats only the other three hosts. Even after casually grabbing her arm Elisabeth isn't even worthy of eye contact. 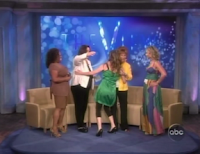 In this next photo, Elisabeth sees what is going on and she is pissed! I love it. Alicia greets all the other hosts with a hug, the biggest for Rosie. A total professional, Alicia doesn't treat Elisabeth any different than the other hosts during the interview. Most people probably missed the exchange at the beginning altogether. We got to witness first hand that even though speech is free, there are consequences for being a hateful bitch.

If you missed the fight, watch it here.

What else I loved:
If I were a producer at The View or an executive at ABC or Disney, I would be begging Rosie to stay for another year.

Comments:
Daniel, you are so good at blogging about TV. I was laughing so hard reading this post and reliving that episode even though I've watched it over and over and discussed it with you at length.

I love Rosie because she represents the imperfect human who tries to express the truth at all costs. It doesn't always work out, but I respect her for not giving up.

Get out of rosie's fat anus Daniel!

You need to remove your head from your ass Danny Boy. Rosie is a liar and an ideological buffoon. Alicia is a vegan dimwit and has zero class. But as long as they spout your left-wing retard mantra you think they're alright!

I guess haters like Elisabeth breed hater followers. And like Liz, this hater is coward too. He and/or she didn't even leave his and/or her name. He and/or she is probably a big supporter of turture like EH.

1920 called, they want their nickname for Daniel back.

Wow. Anger, table for one, Mr. Anonymous! Back on planet earth, this whole incident is a sad repeat of the Vietnam war, which literally tore our country and our families apart. You have Rosie and Elizabeth who are really passionate about the state of our country and it really makes one sad that they have been so successfully divided by those who could do so much more to treasure human life.

Thank you Daniel, for bringing the best TVBlog in the world around to create a touching moment for all.

I feel like I discussed this with you for DAYS.