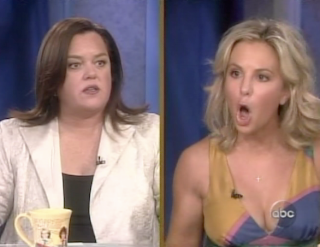 Rosie's not returning to the View on Monday. Her dust up with EH was too much and she's had enough. ABC has allowed her to leave her contract early. No word as to who will be one of the new hosts but rumors about Kathy Griffin are swirling! That's the only way I would keep The View on my TiVo.

For some reason Donald Trump felt the need to make a statement about this and he came in on Rosie's side. He called Elisabeth "one of the dumbest people on television." As much as I can't stand the Donald, it's nice to see that he can be right once and a while.

So let's sum up Elisabeth's offenses. She supports torture, both as interrogation and punishment. She supports the war in Iraq at the expense of so many civilian lives and the lives of our own brave soldiers. She believes Rosie thinks our troops are terrorists. And now she's responsible for destroying the best show on daytime. I blame her personally.

Comments:
True. But you have to admit - her skin looks incredibly supple in that photo. Just flawless. Why didn't Donald comment on that? He usually doesn't miss these things.