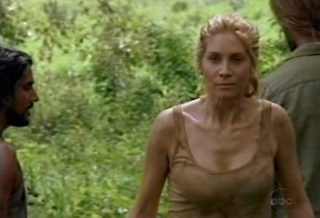 One of the biggest hurdles I needed to get over in watching this show the first season was the fact that the island had no natives. If the Polynesians found their way all the way to Hawaii, they would have most certainly stumbled across the island. Flight 815, Desmond's sailboat, Yemi's beachcraft, Henry Gale's Balloon, and Delenn's science vessel all made their way to the island by accident, why no one in the distant past? They finally explained why there was no permanent population on the island in this week's episode: no one can carry a baby to term on the island, except for those pregnant before they got there like Delenn and Claire. This was probably one of the most revealing episodes of the series this season. We now know the motivation for Juliet trying to get Jack to kill Ben and why she was so upset at the book club in 3.01. I do so love the changing character dynamics. In the first season Sayid tortured James, now they go on adventures together alone. And of course Jack is back and as big a dick as ever. I love that he has been completely fooled by Juliet. She's my favorite character.

Here's what else we learned:
Here are the new questions.