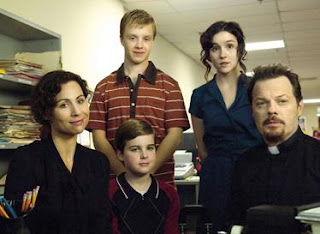 The good thing about well established cable channels like FX is they can get by with one or two new shows at a time. Nip/Tuck finished its fourth season in December and It's Always Sunny in Philadelphia is over the summer horizon. Right now they have two shows: Dirt, which I gave up on after the first episode, and The Riches. This is a surprisingly good show about unlikable characters. Eddie Izzard and Minni Driver star as the parents of a family of con artists and petty thieves. The premier was last Monday. As the family fled from their extended family of other traveling thieves, they were involved in a car accident which killed a rich couple on their way to their new home. The Malloy family then assumes the identity and move into their gated-community mcmansion. While the characters have no redeeming qualities as members of society, they have a deep love and caring for each other. I will be interested in seeing how long they can pull this off. Episode #2 is on tonight.