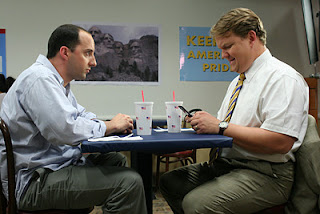 Tonight on NBC, Andy Ricter's new show Andy Barker, P.I. premiers. Andy is an accountant who moves into a new office formerly occupied by a private investigator. Suddely he starts getting cases and solving them. Also starring with Andy is Tony Hale, Buster from Arrested Development. If you miss it tonight, you can watch it online.

After that, Jeff Goldblum stars in yet another "I talked to dead people" show called Raines. This is the one ghost show that doesn't feature a person with a gigantic rack. I'm going to skip this.
Also starting tonight is October Road. This stars Donna from That 70s Show. Its about beautiful 20-somethings living in a small town. Have you ever seen beautiful people in small towns? No? That's because the beautiful people move to the big city.
And finally, The Showbiz Show with David Spade is returning for a third season. I guess David Spade is done filming Rules of Engagement for the season. This show is redonkulous, don't miss it. It's on after a rerun of last night's South Park. If you missed it, Butters gets sent to an "ex-gay" camp.
# posted by Daniel Brown @ 12:40 PM

Comments:
What ya think of Andy? So far I like it - a little off beat but fun. It's kinda different for their usual Thursday shows.